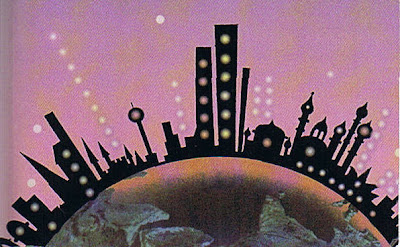 I am in a city,
surrounded by a cacophony of
technologically produced images:
lights, sounds and just plain noise.

It is now 2013 and the experience at
this time is of drowning in
overwhelming stimuli on every level:
physical, emotional, mental.

It was this that led to the information
overload this is still dissolving
structure.

All around us I see virtual and other
simulated realities.
The old reality ended on
21 December 2012.

Finally we have all moved into a
bubble reality;
the waveform or
mythic reality.

Complete art experiences
that pull us into the moment
heighten our senses,
produce tastes in our mouths,
sensations on our skins,
odours and
raw emotions.

Image and sound so sharp, so perfect
you are not left wanting.
All of this is experienced inside the homes
and outside on the streets
so that we cannot move from this,
cannot get away from this explosion of live entertainment.

Physical people,
holographic people on a multitude of huge screens,
an explosion of people expressing themselves
with clothes so varied in colour, style and texture
that when you look into the crowd
against a background of neon laser beam lighting
and contrasting architecture,
you can see geometric patterns emerging,
shapes dancing in and out of existence.
This street I am viewing is filled with humanoid figures
rushing around as individuals,
or as tribes and clans through the streets.

Where are they rushing?
They are just rushing;
techno hippies.

Earth-keepers
Eco-warriors
Corporate clans
‘Jesus loves you’ groups
‘Save our society before it is too late’
‘I am the way’
‘No, this is the truth’
‘This is the one way’
‘This is the truth of one’
religious, scientific, new age
expansion of consciousness drug sellers,
conspiracy nuts,
conspirators,
gods, lunatics, aliens and alien impersonators,
paranoiacs all chanting, raving, billboarding.
Just because some of them are fruit cakes
does not mean what they are saying is not true.
At first glance, there is no way of telling
who’s who, who’s real, who’s not.

Is this hell?
No, this is the playground,
the playground of life.
With this vision and feeling and these images
I get instantaneous stream of thought
of what or who is controlling this.
There’s
world government
continental government
national and local councils
corporations
cross-cultural organizations
media of every description: film, TV companies of every size,
all vying, bombarding us with image information,
all projecting different truths,
different realities that we can walk in to,
we can believe in.
Ideological groups
musical, visual, artistic
other-dimensional alien intelligence
aliens on Earth
walk-in aliens in human form
information misinformation
relentlessly around the clock,
an infusion of chemicals to trigger us
being pumped into the environment,
into the air and water,
an expanding drug culture
and abundance of drugs
available for every emotion, thought and reality,
transformer drugs that lead to reports of new myths
and ‘proofs’ that people who are on these drugs
have actually shifted form,
walked through walls, and
merged with environments;
matter behaving strangely,
objects that appear, reappear or just disappear.

There’s panic to control these drugs,
fear being spread to create condemnation,
questions being asked everywhere by everyone:
who’s deluding themselves
who’s paranoid
what’s true and, more importantly, what is reality?

But they are not.

It is you,
the individual.
The challenge is for you to be aware that
You are in control. 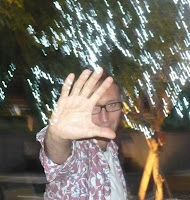 This vision and its accompanying dialogue was a powerful download for me. I see it now as metaphor for the energy coming in at the Winter Solstice in 2012. It speaks to me of the changes emerging during the 2012 era. I suspect now that the world capital city I saw is in China.